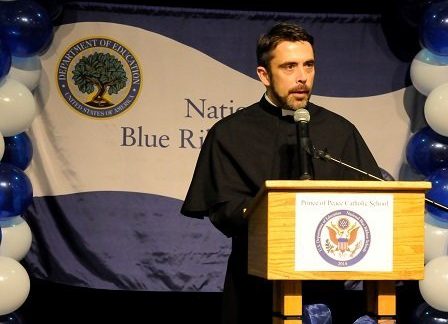 Father Smith is a native of Greenville, South Carolina.  He was received into the Catholic Church at the age of 13 at St Mary’s.  After graduating from Southside High School, he went to Christendom College in Front Royal, Virginia.  After a year living in Rome studying at the Pontifical University of the Holy Cross, he entered priestly formation at the Pontifical Roman Major Seminary, the Pope’s personal seminary, for service in the Diocese of Charleston.  While there, he obtained a licentiate in dogmatic theology from the Gregorian University and also studied French at the Institut Catholique in Paris.  Father Smith was ordained Deacon by Camillo Cardinal Ruini, Papal Vicar for the Diocese of Rome, on 30 October 2004 and Priest by Bishop Robert Baker of Charleston on 23 July 2005.

Father Smith spent two years at St Mary’s, Greenville as Parochial Vicar and then Administrator pro tempore.  He then was assigned to St Peter’s, Beaufort and Holy Cross, St Helena’s Island as Parochial Vicar and Administrator pro tempore.  He then spent two years at St Francis-by-the-Sea on Hilton Head Island.  In all of his parishes, he had primary responsibility for Hispanic Ministry, chaplaincy and teaching in parochial schools, and apostolate to the sick.  While in Beaufort and Hilton Head, Father Smith pursued a Master of Business Administration degree at the Citadel.

In 2009, Bishop Guglielmone assigned Father Smith to the University of Navarre in Pamplona, Spain.  He defended his doctoral dissertation in dogmatic theology on the thought of twentieth-century French Jesuit Henri De Lubac in June 2012, after which he received the degree of Doctor of Sacred Theology.

Father Smith speaks Spanish, Italian, French and some German.  He enjoys reading, kickboxing, and music.  He is a member of the Church Music Association of America and contributes regularly to the Chant Café blog.  He is also a member of the Catholic Theological Society of America and is a speaker on sacred music, liturgy, theology, and catechesis.  In 2013 he was elected to the Society for Catholic Liturgy. In 2014 he was received into the Equestrian Order of the Holy Sepulchre of Jerusalem as a Chaplain.

On 10 February 2015, Bishop Guglielmone appointed Father Smith the Pastor of Prince of Peace.